Hello people!
Have you missed me? I am sure you did.
And I am talking to those who were following this blog years back
Like in 2007! (omg feels like ages ago)
Those who know that The Observer is not the only author here
And that I am the infamous “Haya” have actually contributed more engaging and exciting content to this blog.
So Observer but this is true
Whether you agree with it or not!
Yes more “exciting”!
If you don’t believe me, go back and “Google me”
Wait, don’t go and google me as you won’t find anything about me
but search this blog for my older posts.
I promise, you will enjoy reading them.

Anyway, since The Observer started blogging again two weeks ago and I have been itching
I want to blog too!
For new readers, please let me introduce myself
I am The Observer’s female alter ego
The first female voice he used in this writings
Long before those 4 “wanna be” brides in his first book
and long before that boring Janna in his second
who keeps whining and whining about how unhappy she is at a time where she is back to her youth and have all what she wishes for at her fingertips!
What the hell?! Seriously Janna? Just wake up.
If you want Kamil, just go after him and be happy! (rolling my eyes)
And yes, long before his latest dominatrix protagonist – Laila
What the fuck?! How did you get there Observer?

Don’t get me wrong guys, I am all for women empowerment
And yes, there are aspects of Laila’s character that I admire
And I did enjoy reading the book
But that intro page! OMG!
What were you thinking??!
A Jordanian woman wearing a jockstrap and fucking her boyfriend!
SERIOUSLY?
Like SERIOUSLY?
Are you NUTS? Observer?
And then you go all the way and get surprised because the book got banned in Jordan!
Duh!
Did you really expect it to pass censorship? Like really?
It is a book habibi! A printed one! Not your blog!
And you needed to get a reality check!
But hey, I admire your courage
You actually went that far into writing it!
And getting it published!
And talking (shamelessly) about it!
Bravo!
I say bravo although it is not something I would have ever agreed to
If you have consulted me
But anyway, the book is out
And it is banned in Jordan
And people are finding a hard time to find it
Happy?
Enough with berating you
As I actually understand what you were trying to do with that book
I disagree with the means but under where you are coming from
And you people, stop categorizing the book as “pornographic”
Because IT IS NOT!
Yes it has a shocking opening
And few sexual scenes
But IT IS NOT PORN
It is not more of a porn than this new mini series on Netflix called Bonding
If you read Laila and enjoyed it, then you must watch it
It builds on a similar concept
(No Observer, Hollywood is NOT stealing your ideas)
Bonding is a more of comedy series of a dominatrix sex worker with a gay assistant
Intriguing, no?
Original? Despite Observer’s opinion, I’d say yes!
Entertaining? Definitely!
And I have to admit, it feels like it originated from the same line of thinking The Observer had
As in challenging mainstream stereotypes of women’s role in bed
And that’s good – a noble cause I’d say
And while the show taps onto some “disgusting practices”
It does it in a light fun way
Far from the serious tone of Laila
And there is NO SCENE that shows Mistress May (the protagonist of the show) fucking any of her men with a dildo!
(maybe in the second season?) – I bet!
But anyway, there are two things that I want to highlight here
FIRST: I understand that The Observer introduced that scene to provide a critical read for the entire act. He does it clearly towards the end of the story. And to be honest, it is a needed thought provoking read.
SECOND: (*spoiler alter*) Bonding ends with a crime, one that Mistress May commits, and articulates that she can’t report to the police because no one would believe her. That sounds exactly like Tarek’s dilemma in Laila’s story. The same concept of how someone would react when he is doing something wrong in the eyes of the society and ends up in much worse situation. Come clean or run away?

What would you do?
Have your read Laila and the Lamb or watched Bonding?
If not, then you should.
And when you do. Come back here and let me know what you think! 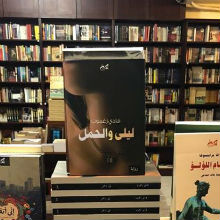 It makes me happy to get such feedback on my latest book “Laila wal Hamal”, especially when it comes from a Jordanian woman. Hiba Roza posted this new review on the book’s good reads page today.

Such a strong one of a kind novel, I personally was searching far too long for any work of Arabic literature that portraits women as the leader of the relationship, so when I first read this I was finally satisfied, thank you for that.

Sadly, this is true. And played a good part in why I wanted to write this book. Women are not fairly represented in Arabic Literature. I think that Feminist Arabic Literature has fallen to the discourse of victimizing women, ending up in emphasizing the notion that women are weaker in nature.

Now as for the characters I could find a strong connection between Laila and Tareq, so I sympathized with the two of them, however at the end I couldn’t but to feel happy for the death sentence, it can symbolize the end of the macho patriarchy era so I didn’t find any sympathy in me towards Firas.

This part has a spoiler but I like how she interpreted the event as a symbol for the end of the macho patriarchy era, which is inline of what I had in mind. I wanted to write a radical feminist novel, and made sure to challenge the notion of “The Eastern Man”. I punish men in the book, not because I want to punish men in real life, but to show how toxic masculinity is bad to both men and women.

I like the story line so much and you know you could’ve given us more flashbacks to the characters’ childhood, and more insight to the characters’ psyche, this novel could’ve been way longer if you invested more into it and you owe us that being the first author to examine such plot twist. Please write something similar soon and thank you so much!

I hear you Hiba and agree with you. Maybe I should have invested more into it and added to it. I really wish other Arabic authors would pick up the line of thought and start brining up stories with such strong lead women characters. It is about time!