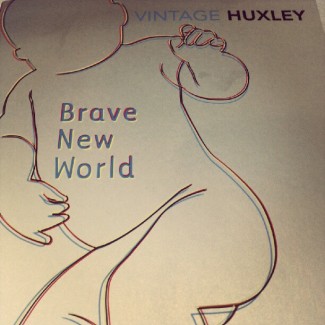 I am pretty much impressed with the Utopian worlds in literature that I had no idea existed before I started my “Creativity and Utopia” module three weeks ago. There is a huge amount of astonishing creativity in those imaginary worlds that keeps you wondering about the brilliance and intelligence of those writers who were able to break down all of the social systems they were bound to and create new brave worlds.

We have started with Thomas More’s “Utopia”, then delved into HG Wells’s “The Time Machine” and Edward Bellamy “Looking Backward” (which I missed reading) and this week “Brave New World” for Aldous Huxley which I should finish by Thursday along with George Orwell’s “1984” and Yevgeny Zamaytin’s “We”.

I don’t know why, but I find this genre of literature to be very compelling. I discovered a hidden passion towards exploring those worlds. I guess it has partly to do with my understanding of Utopia not to be an alternative perfect world but an alternative set of systems that is applied in an imaginary world where it helps improving or making worse the life of its people. For me, the current systems of living is a Utopia on its own.  A Utopia that is ruled by a set of beliefs and rules that are constantly being challenged, harshly by ideas, and shyly by application. It is a Utopia that is not perfect but improved continuously with reviews and tweaks.

On the other hand, there is this alternative Islamic Utopia promise that has been gaining ground for decades in the Arab world with a strong belief system and applicable rules. A Utopia that shares many similarities with the dystopian side in those books where the laws it tries to impose don’t take into consideration the differences of its subjects, but try to melt any kind of individuality into the notion of superiority of the common cause at the expense of one’s own needs. It is kind of as scary as “Brave New World”.

And there is also my own Utopia that I am trying to imagine for my next book “Jannah ala al ard” (Heaven on Earth) of the status of the world when death from age no longer exist. I can’t think of any better timing for this module to cross my life! It is like a “Universe” gift for me to build up my world of fiction. Although, I doubt that I can be as creative as those amazing writers, I am sure that I will learn a lot from reading their amazing worlds.

Do you have something to say? Cancel reply